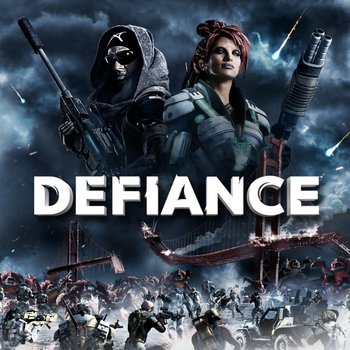 Defiance was a Massively Multiplayer Online Third-Person Shooter developed by Trion Worlds, released on April 2, 2013 for the PC, PlayStation 3 and Xbox 360, and serving as a tie-in for the TV series.

In an Alternate Timeline where Earth was devastated in a nine years-long conflict between humanity and a collection of alien races known as the Votanis Collective until a truce between a group of human and Votan soldiers during the Battle of Defiance in San Francisco ended what would be later known as the Pale Wars.

Thirteen years later, the United Earth Republic (a nation formed in north-eastern U.S following the war) hires a number of Ark Hunters — heavily-armed adventurers and scavengers of Votan technology that surfaced shortly after the war — as part of an expedition sponsored by Von Bach Industries to the ruins of San Francisco in search for lost Ark technology and to establish a foothold in the region. You, one of the many hired Ark Hunters, are given a combat enhancement E.G.O implant just before the expedition goes into disarray fast upon entering the Bay Area, and you end up teaming up with an Irathien scavenger named Cass Ducar, renowned technology C.E.O Karl Von Bach and Lawbringer Jon Cooper, as you travel across San Francisco trying to stop a xenophobic alien faction — believed to have dissolved after the Pale Wars — trying to assemble and activate an Ark in order to wage a war against humanity and those willing to co-exist with them.

In July 2018, the game was relaunched as Defiance 2050 with better graphics, rebalanced gameplay, items, weapons and events, and was also released on the PlayStation 4 and Xbox One. However, this version co-existed with the original game, which was renamed to Defiance 2013.

After 8 years, Trion Worlds shut down the servers of both the original 2013 game and the 2050 version on April 29, 2021, citing the games' low playerbase making the games no longer being profitable enough to keep going.