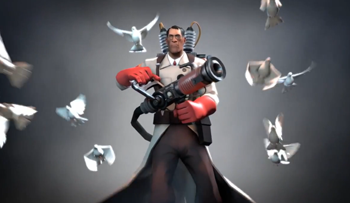 "*spitting noises* What's with all these doves? Did he go overboard with the theatrics again?"
— Nagi Springfield, Negima! Magister Negi Magi
Advertisement:

A Stock Visual Metaphor: when something significant happens, expect to see birds flying off, especially white ones, especially pigeons (biologically the same thing as doves). These birds are likely to suffer from Perpetual Molt. This is Truth in Television as flocks of trained pigeons are sometimes incorporated into ceremonies such as weddings and flag retreats. And if the action involved movement, it might startle any nearby birds into flight.

Frequently subverted; not to be confused with the Bat Scare, in which flying creatures are symbolic of abandonment if anything. See also Foreboding Fleeing Flock, which is about flocks of birds fleeing the scene being a sign of something bad about to happen.

Similar to That Poor Cat and its automotive equivalent, That Poor Car. Pesky Pigeons is the malevolent version in which pigeons are portrayed as annoying or predatory birds. Related to Doves Mean Peace.

Doves fly off when Ling-Ling and Ni-Pul are shot.

Doves fly off when Ling-Ling and Ni-Pul are shot.