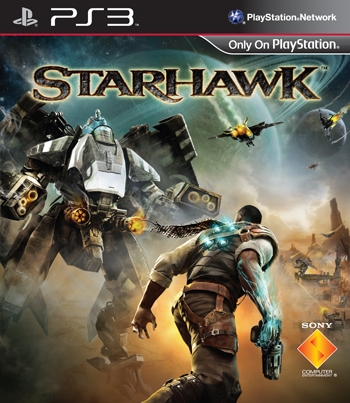 Starhawk is the Spiritual Successor to the Warhawk series, both of which are PlayStation Exclusives. While still heavily focused on multiplayer, Starhawk features a single player campaign which is structured such that it introduces the player to the core mechanics of the multiplayer.

It's sometime in The Future. You are Emmett Graves, a hired gun and "Rift Salvager". Out here on the Final Frontier, there has been a new gold rush for "Rift Energy", a valuable but dangerous power source. Graves was partially mutated by this energy, but a Power Limiter on his back keeps him human. The Outcasts, who worship Rift energy, and viciously attack those that try to mine it across the galaxy, weren't so lucky. Together with his good friend Cutter, Graves protects independent Rift Energy harvesting operations from the Outcasts, also called "Scabs." They have a ship called Annabelle, which can drop prefabricated structures from orbit on command, as do players online.

The multiplayer includes up to 32-person matches of Team Deathmatch and Capture the Flag, as well as four player cooperative wave defense. Players are given an entirely unsettled landscape to riddle with bunkers, turrets, barriers, and vehicle depots. The developers specifically wanted to capture the fast pacing of pulling a trigger on a gun when building an encampment.

The Official Trailer can be found here

On November 14, 2012, Emmett was confirmed to be one of the first two DLC fighters, packed alongside his rival, Kat, in Playstation All Stars Battle Royale.