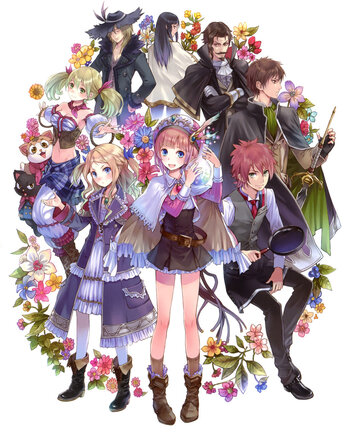 Atelier Rorona: The Alchemist of Arland is the eleventh (or the sixteenth, depending on how you number them) game in Gust's well-known Atelier series and the first of the lot to sport 3D graphics. Like many Atelier games, it can be described as one-part JRPG, one-part Time Management Game and three-parts Item Crafting with a dollop of Moe for flavour.

Atelier Rorona tells the story of a young lady named Rorolina Frixell (just call her Rorona), an apprentice alchemist who lives in the capital of the Arland Kingdom. One day, a knight delivers a message from the government: due to the recent advancements in steam technology, they will no longer support the art of alchemy and have made plans to shut her workshop down. The only way that Rorona can change their mind is by carrying out a series of tasks over the next three years designed to prove that alchemy can still be relevant in modern day life. With her alchemy teacher being too lazy and apathetic to care, it falls to Rorona to develop her alchemy skills and save her workshop from closure.

The game has three sequels, which (together with this game) make up the "Arland series": Atelier Totori: The Adventurer of Arland, Atelier Meruru: The Apprentice of Arland, and Atelier Lulua: The Scion of Arland. A remake titled New Atelier Rorona (Atelier Rorona Plus overseas) for Playstation Vita and the PS3 features completely redone graphics and game system, new costumes for Rorona, and post-game content. Another rerelease, Atelier Rorona DX, was released on September 20, 2018 in Japan and December 4, 2018 in North America as part of the Atelier Arland Series Deluxe Pack for PlayStation 4, Nintendo Switch, and Steam.

You may find the game's proud old (Japanese) blog here