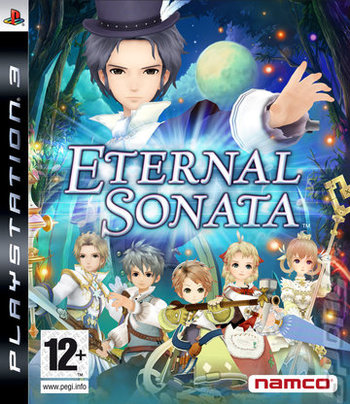 "How should I put this? If I told you that your world exists in a dream I'm having, would it startle you? At this moment, I'm asleep in Paris. As a pianist — and as a composer, as well — I have produced many popular works that have brought me a rather good deal of renown there."
— Frederic Chopin explains the game's premise
Advertisement:

Eternal Sonata Japanese title (トラスティベル 〜ショパンの夢〜 Torasuti Beru ~Shopan no Yume~?, Trusty Bell: Chopin's Dream) is a role-playing video game developed by Tri-Crescendo and published by Namco Bandai Games. The Xbox 360 version of the game was released on June 14, 2007 in Japan, September 17, 2007 in North America, and October 19, 2007 in Europe. The game was also released on the PlayStation 3 with additional content Japanese title Trusty Bell: Chopin's Dream – Reprise (トラスティベル 〜ショパンの夢〜 ルプリーズ Torasuti Beru ~Shopan no Yume~ Rupurīzu) on September 18, 2008 in Japan, and in North America on October 21, 2008, and in Europe on February 13, 2009.

It is notable for its use of classical piano pieces, educational cutscenes featuring real paintings and photographs (in contrast to the cel-shading graphics of the game) and lush landscape design.

Frédéric François Chopin, the famous Polish pianist and composer, is on his deathbed at the age of 39. Feverish from tuberculosis, he hallucinates a dying dream in which he is exploring a strange fantasy world that seems to parallel aspects of his own life and music.

Polka, a young girl with an uncanny resemblance to Frédéric's dead little sister, is one of the inhabitants of this otherworld. As someone who has developed magical powers (which is feared as a symptom of impending death), she is shunned by the world and lives a lonely life selling herbal medicine to a nearby village. When The Empire introduces a mysterious new wonder drug that threatens what little business she gets, Polka begins an epic journey across the land to meet with the Evil Overlord in person and plead her case to him.

Frédéric, believing that this dreamworld is a form of purgatory for his soul, joins Polka on her quest so that he may see the dream to its conclusion and pass peacefully onto the afterlife. But as he continues forth, he is given more and more reason to doubt that initial conclusion. Is Polka just a conjuration of his dying mind, or is she a real person living in an Alternate Universe that Frédéric has somehow tapped into? And if he truly is the Cosmic Keystone of this world, then what will happen when Frédéric finally breathes his last?

The battle system reflects the latest influences in RPG design at the time it was created. Your character is given a set interval of time with which to move or attack, and the special moves available to your character depend on whether they're standing in light or shadow. Some environments have moving clouds and the like, making it a challenge to keep in a location where your heals can go off. It is possible to block, counter, and build up a chain called the Harmony Gauge in order to boost the power of your special attacks.

The RPG gameplay is accompanied by both original and arranged pieces by the virtuoso composer, and the action is occasionally interspersed with sequences that relates the events to the very real drama of the historic Chopin. An encounter with an unbeatable swordsman in a rain-soaked jungle reflects Chopin's near-fatal bout of tuberculosis on Mallorca during the rainy season. Escaping from the castle dungeons with the aid of La Résistance parallels Chopin leaving his native Poland mere days before the November Uprising throws the country into chaos, and so forth...

The game was first released for the Xbox 360 in 2007, then for the PS3 (with added features and a somewhat altered plot) in 2008. The PS3 adaptation includes two characters upgraded to playable status, new dungeons and character costumes and a number of significant additions and improvements to the game's story and script. On the downside, though, while the Xbox 360 version includes Achievements, the PS3 one does not support Trophies, as it was a launch title for the PS3 and was apparently created before the Play Station Network and Trophies were conceived of.

There is also a manga adaptation of the game. However, it is only 10 chapters long and changes many aspects of the story drastically.

Not a Tool of Convenience

In "Eternal Sonata" (PlayStation 3 version exclusive scene), Salsa demands that Frederic Chopin use his magic powers to create a steak for her. He tells her that magic is not a tool of convenience and that even if it could be used for such things, their first thought should be of starving children. This rationed argument utterly fails to sway the whining girl.

Not a Tool of Convenience

In "Eternal Sonata" (PlayStation 3 version exclusive scene), Salsa demands that Frederic Chopin use his magic powers to create a steak for her. He tells her that magic is not a tool of convenience and that even if it could be used for such things, their first thought should be of starving children. This rationed argument utterly fails to sway the whining girl.