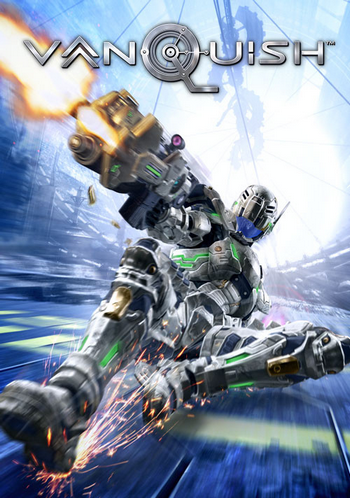 War has accelerated.
"SC-01 Providence is currently under the control of those responsible for the coup in Moscow. We believe the operation is being led by a red known as Zaitsev... Oh yeah, this is Sam. DARPA sent him to come along with us. Men, we've got eight hours to stop New York from becoming the next San Francisco. Make no mistake, we will stop that from happening!"
— Lt. Col. Robert Burns
Advertisement:

Vanquish is a Stylish Action Third-Person Shooter from PlatinumGames, the brainchild of Shinji Mikami. Said by many to be what it would be like to give Gears of War a few shots of espresso.

The plot revolves around a massive Space Colony named Providence, established by the United States and outfitted with a massive solar-powered microwave array designed to collect energy and transmit it to Earth. However, the Order of the Russian Star, a militant regime that had recently seized control over Russia in an armed coup, has invaded the colony. They've turned its microwave transmitter — meant to transmit power to ground-based collector stations as a limitless energy source — into a weapon of mass destruction and cooked San Francisco's entire population. Following the attack is a prompt ultimatum: the United States will surrender to Russia, or they'll turn their new superweapon on New York City.

The United States' response is to deploy a massive counterattack on Providence, spearheaded by the U.S. Marines led by Lieutenant Colonel Robert Burns* (not to be confused with the real-life poet). Accompanying Burns is Sam Gideon, a researcher from the Defense Advanced Research Projects Agency (DARPA) outfitted in a prototype battlesuit. It falls to Burns, Sam, and the Marines to secure the colony before the Russians can fire the weapon again.

The main gameplay thrust is that Sam is covered head to toe in Power Armor that gives him a variety of unique features. Not only does it protect him from gunfire, but it also allows him to move at exceptionally fast speeds by firing jets out of the back of his knees. Couple this with a time slowing ability, a variety of insane melee attacks, and huge heaping of big guns, and it's clear Vanquish is interested in allowing the player to feel as powerful as possible.

Vanquish was delivered to the world on October 19, 2010 for the PS3 and Xbox 360. Sega released a PC port on May 25, 2017 with unlocked frame rate and resolution, as well as mouse and keyboard support. It was also released with Bayonetta for the PS4 and Xbox One on February 18, 2020 as a 10th anniversary launch bundle.