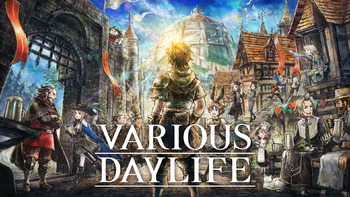 An RPG of Everyday Life and Adventure
Various Daylife is an Eastern RPG published by Square Enix, originally for Apple Arcade in 2019, but was removed from the service and soon after ported to Steam, Nintendo Switch, and PlayStation 4 in 2022. The game was developed by DokiDoki Groove Works alongside the developers behind Square series Bravely Default, Octopath Traveler, and Triangle Strategy.
Advertisement:

The game sets in the coastal city of Erebia, located at the southern edge of the continent of Antoecia that has mostly gone unexplored save the city in question, under the jurisdiction of the kingdom. The player assumes control of a colonist, who has just disembarked at a port within Erebia and is tasked with helping to maintain the city by taking up jobs and to explore the rest of the hitherto-unknown continent with the aid of some fellow colonists.