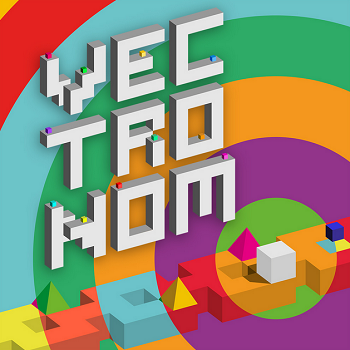 Vectronom is a highly abstract Rhythm Game/Platform Game hybrid, where you control a cube as it moves through the 30 stages of 10 levels composed of geometric platforms scattered in the void, all in tune to the music.
Advertisement:

It was developed by Ludopium and released on May 28th, 2019 for PC and on Nintendo Switch the following day. Both versions feature drop-in multiplayer for up to four players, but so far, only the PC version allows the player to generate stages from their own music, or to use dance pads and electronic music instruments to control the cube.