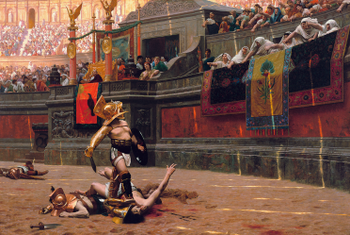 Standard for Gladiator Games, especially in Hollywood History.note Pollice Verso by Jean-Léon Gérôme.
Comicus: O Emperor, spare this poor man. He has fought so bravely for our amusement.
Emperor Nero: Let him … die!
Comicus: Tough shit.
— History of the World Part I
Advertisement:

Two characters meet to do battle on the field of honor, watched by someone in a position of authority over them. Maybe they are gladiators, fighting for the amusement of the King and his people. Maybe they are two students fighting for the right to learn from a master. In any case, they fight tooth and nail to defeat each other, and eventually one comes out on top, tasting victory while the opponent lies helpless and defeated.

As he enjoys his hard fought victory, he is congratulated by the onlooker, who then coldly orders him to finish the job and finish off his opponent, killing them and taking the rightful place as the most brutal and powerful fighter in the land.

If the winner is The Hero (especially if he is an All-Loving Hero), he will more often than not refuse to kill his opponent, and attempt to leave without any more blood on his hands, thus earning the ire of the onlooker (unless it was a Secret Test of Character all along). If the heroic fighter is more aggressive, he may instead kill the captive to establish his character as being more inclined to brutality, to the amusement and satisfaction of the onlooker (who may not know that he is next).

Related to Coup de Grâce and Mercy Kill, where a character does this of their own free will, instead of being ordered to. Compare Kick Them While They Are Down, Get It Over With. Contrast Shoot Your Mate, Kill Him Already!.

The name of this trope comes from Mortal Kombat where it's a meme, being said after every fight to give the player the opportunity to use a Finishing Move, but in the actual storyline is rarely used. Don't confuse this for the Finnish band HIM.