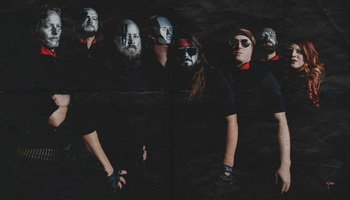 Left to Right: Sir Dr. Robert Bakker, Shock Magnum, Murphy Weller, K.I.L.R.O.Y., Commander B. Hawkins, Raul Panther III, Reanimator Lovejoy, and The Gambler.
We've given everything we can.
There are no heroes left in man!
— Protoman, The Stand (Man or Machine)
We will be heroes!
(We will BUILD heroes!)
— Dr. Light (Dr. Wily) The Good Doctor
Advertisement:

The Protomen are a very large indie progressive rock band from Nashville, TN, whose musical catalogue is based around a Rock Opera trilogy inspired by Mega Man. Very loosely based off of the mythology of the classic Mega Man games, the first three in particular, it shows an Orwellian Dystopia that's a Deconstruction of Holding Out for a Hero, and a general examination of the psychology behind fascism.

The first album, a self-titled release also known as Act I or Hope Rides Alone, was self-published in 2005, and tells the story of how Protoman and Megaman were created to fight against Dr. Wily's regime and the very different paths their lives took. It was followed in September 2009 by Act II: The Father of Death, a prequel which tells the story of how Dr. Light and Wily created artificial intelligence, and how it all went so very wrong. Act III takes place sometime after Act I and is to be released an an unspecified date. A live

of an Act III track was heard at PAX 2012, and a second song was previewed

In 2012 they released their first live disc, a Queen tribute, and an in-universe album of 70s and 80s covers called The Cover Up was released in early 2015. Both Acts also received a remastered rerelease on vinyl. Makeup and Vanity Set's 8-bit remix of Act I is getting a release on vinyl. The Protomen also held an April 2012 music video shoot for Act II track "Light Up the Night" and released a vinyl of songs from Act III in August 2015.

The Protomen have appeared in a Zombie Apocalypse webcomic, Dead of Summer. Several members have other bands, including Cheer Up, Charlie Daniels (Turbo Lover, occasionally Panther, the Gambler, and Sir Bakker in live shows), Adam And The Couch Potatoes (Turbo Lover, with the Gambler appearing in a music video), and The Ascent Of Everest (Sir Bakker). Makeup and Vanity Set is affiliated with them, having done an 8-bit chiptunes mix of Act I, with plans to make one of Act II. They are also affiliated with Brentalfloss, The Megas, Tupper Ware Remix Party, and Tenacious D, and have gotten "Light up the Night" into Rock Band 4. They have also produced music for Video Game High School, and their cover of "In the Air Tonight" was used for season 3 of Cobra Kai.

Additionally, the Protomen composed the score for Terminator the Second, a theatrical piece of found art that reconstructs the plot of Terminator 2: Judgment Day using dialogue from the works of William Shakespeare. They appeared in it as the SWAT Team that takes down Dyson.

is in production. An official music video for "Light Up the Night" was also released and can be viewed for free, bought, and downloaded on their website.

The main page of their website can be found here.

An Act I interactive website can be found here,

while the Act II website can be found here.

Tropes relating to the Acts should be placed on the recap page.