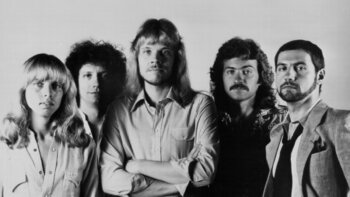 From left to right: Tommy Shaw, John Panozzo, James Young, Dennis DeYoung, Chuck Panozzo
I thought that they were angels but to my surprise
We climbed aboard their starship and headed for the skies
—"Come Sail Away"
Advertisement:

Although they began as an artsy prog-rock band, Styx would eventually transform into the virtual arena rock prototype by the late 1970s and early 1980s, due to a fondness for bombastic rockers and soaring power ballads. The seeds for the band were planted in another Chicago band during the late 1960s, the Tradewinds, which featured brothers Chuck and John Panozzo (who played bass and drums, respectively), as well as acquaintance Dennis DeYoung (vocals, keyboards). By the dawn of the 1970s, the group had changed its name to TW4, and welcomed aboard a pair of guitarists/vocalists, James "JY" Young and John Curulewski—securing a recording contract in 1972 with Wooden Nickel Records (a subsidiary of RCA). Soon after, the group opted to change its name once more, this time to Styx, named after a river from Classical Mythology that ran through "the land of the dead" in the underworld.

The band had a string of top 40 hits throughout the 1970s and into the 1980s, including such mainstays as "Come Sail Away", "Renegade", and "Snowblind" (and in December 1975, they replaced Curulewski with Tommy Shaw, formerly of a local band called MS Funk). Internally, the group was wracked with tension. DeYoung, who had begun to take onto himself the role of "band leader", attempted to steer Styx into a dramatic, almost operatic direction. This brought him into direct conflict with most of the rest of the band, who were more interested in a harder, rocking sound than the soaring balladic style DeYoung envisioned. The tensions came to a head in the form of the tour for Kilroy Was Here, an early-80s concept album cast around a 20 Minutes into the Future scenario in which Moral Guardians had succeeded in outlawing Rock & Roll. DeYoung managed to turn the concert into a musical telling the story of the album; this pleased neither his bandmates (who felt profoundly uncomfortable trying to act in between songs) nor the fans (who felt they were being cheated). The tour failed miserably, and in its wake the band broke up. In 1990 the band reunited—minus Shaw (who was in Damn Yankees around that time)—and hired Glen Burtnik as his replacement. They recorded the album Edge of The Century.

In the mid-90s, the hard feelings had faded enough for Styx to reunite to tour and record again, but DeYoung's control freakery began to raise its head once more not long after (and it also didn't help that DeYoung had announced that he had developed chronic fatigue syndrome with light and heat sensitivity, meaning touring would be very hard for him). Unwilling to put up with it, the rest of Styx expelled him from the band. They recorded another album with Burtnik before he left the band to be close to his family. They now tour as Styx with a new lead vocalist/keyboardist—Lawrence Gowan, formerly a major Canadian solo act in his own right back in the 80s—while DeYoung tours with an orchestra performing Styx songs and new material more in keeping with his personal artistic vision.

"Too much tropes on my hands":