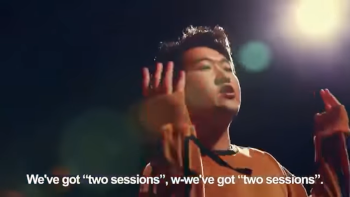 "Two Sessions" is a song from China produced by Xinhuanet Co. and performed by rapper Su Han in 2019. It is about the titular Two Sessions, an annual political meeting. It also describes China's developments, such as computers and quantum satellites, poverty alleviation, and the greening project.

This song provides examples of: