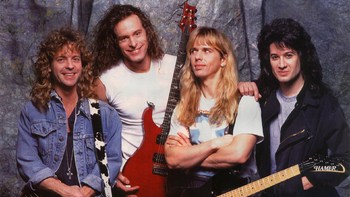 Damn Yankees were an American Hard Rock Supergroup formed in 1989. The members were:

They released two albums in the early nineties:

They were active from 1989 to 1996, with sporadic reunions since. They have all said the door is open to making more music together in the future. Tommy and Jack would later form the duo Shaw Blades and release two further albums by themselves (though Michael would play drums on a few tracks on their first album).