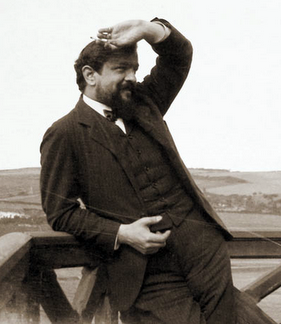 Music is the space between the notes.
First of all, ladies and gentlemen, you must forget that you are singers.
—Instructions to the performers of his opera Pelléas et Mélisande
Advertisement:

Achille-Claude Debussy (22 August 1862 — 25 March 1918) was a French composer. A noted trend starter in the history of music, his Prélude à l'après-midi d'un faune (Prelude to the Afternoon of a Faun) is considered as a turning point of classical music, starting the Impressionist movement and in many ways the antecedent of Modern and Contemporary Classical music. Needless to say, he was and still is a highly important and inspiring figure in classical music. His influence on music is as much as Claude Monet's influence on painting. Modern music historians and critics consider him as the ultimate example, along with his fellow composer Maurice Ravel, of the Impressionist movement. (However, Debussy himself hated the label "Impressionism" for his music, believing it to be better suited for the visual arts.)

Outside of his musical success, though, his life was kind of turbulent. He had an affair with another's wife although already married, his ex-wife attempted suicide (unsuccessfully) and produced a huge scandal, so much that he had to flee to England. He had a child with his mistress after they married, but she sadly only outlived her father by a year, dying in the diphtheria epidemic of 1919. The whole family was buried together.

Inside of the classical circle, his notable pieces include Prélude à l'après-midi d'un faune (Prelude to the Afternoon of a Faun), La Mer (The Sea), the Préludes for piano, and Pelléas et Mélisande (Pelléas and Mélisande). The popular listeners might have heard of Clair de Lune