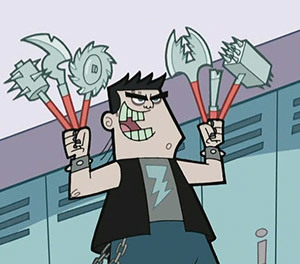 To see the nerds driven before me, and to hear the lamentations of their math club.
"He's big, he's dumb, he's got the IQ of gum
He's got the brain about the size of a sourdough crumb
But he'll beat on your head like a big bass drum
His behavior is truly unruly
He's a bully!"
— Phineas and Ferb, "He's a Bully"
Advertisement:

In fictional works involving young characters, school bullying is commonly used to create conflict and/or build sympathy for a Woobie protagonist, but it is often limited to physical bullying, with comparatively few works acknowledging or depicting psychological and social bullying. The ideal "Hollywood Bully" is invariably a physically imposing, thuggish, Obviously Evil bigot who terrorizes victims through overt, obvious physical force that can easily be recognized by anyone.

This kind of bullying easily lends itself to the visual media, since a loud, fleeting schoolyard scuffle is much more interesting to watch on the big screen than hours of more subtle psychological torment. A climactic fistfight with a bully also provides a much simpler (and easier) way for writers to resolve a conflict, whereas psychological/social bullying doesn't give viewers a loud spectacle, it is harder for adults to recognize and resolve (and harder for victims to prove), and it requires far more attention to Character Development to make it convincing (since a bully has to be believably popular to have the circle of friends needed to pull it off). At the end of the day, delving into the consequences of scrapes and bruises is a far easier job for writers than delving into the consequences of depression, self-loathing, and social isolation.

Interestingly, this represents something of a gender Double Standard as well, since thuggish bullies in fiction will almost exclusively be male, with the most common of such being the Jerk Jock, whereas the few times that psychological bullying is shown, it will exclusively be the domain of petty, giggling Alpha Bitches who torment less popular girls with verbal barbs. With female bullies, physical fights will be shown to be the incredibly rare exception to the rule, while the opposite is true of male bullies. Much like with brutish male bullies, though, dealing with a bullying Alpha Bitch will invariably be as simple as dispatching her with a cathartic series of pranks or a simple verbal smackdown.

Most of the time, the teachers never really do anything to stop the bullying, either because they're oblivious, the bully is very good at playing the Wounded Gazelle Gambit to get off scot-free and paint their victim as the bully, or they get a kick out of seeing the victim suffer, possibly even using the bully as their attack dog.

On the flipside, though, these kinds of bullies tend to be all brawn and no brain, sometimes bordering on Too Dumb to Live. In this case, their victim tends to find a way to outsmart them, maybe even humiliate them in the process.

This is on its way to becoming a Discredited Trope with the recent rash of cyberbullying and bullying-related suicides making news, but it only makes the few works that cling to this misconception stick out like a sore thumb. With tighter security in schools in the post-Columbine era, fistfights in crowded high school hallways in full view of crowds are also far less believable that they once were. For this reason, it also tends to be far more common in works that are at least a decade old. However, due to Values Dissonance, it is still Truth in Television in the United Kingdom, especially as there have been well-publicised reports of teachers being unable to control their students there — so it is still an Omnipresent Trope in British educational programmes (e.g. Waterloo Road) and a Cyclic Trope elsewhere in British society, despite cyberbullying being common.

Sub-Trope of The Bully. Compare Women Are Delicate (the reason for the above-mentioned distinction between male and female bullying), Obviously Evil, and Card-Carrying Villain.

Shaun from "The Birch" ruthlessly bullies Kris in a way that most would find morally questionable and relentlessly cruel. He even pulls a knife on him in a way that implies that he feels offended by Kris' very existence.

Shaun from "The Birch" ruthlessly bullies Kris in a way that most would find morally questionable and relentlessly cruel. He even pulls a knife on him in a way that implies that he feels offended by Kris' very existence.