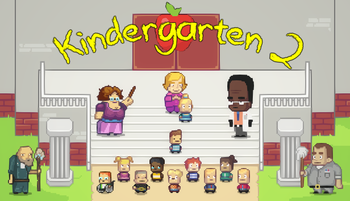 Kindergarten 2 picks up where the previous game left off. It's finally Tuesday, and you've been moved to an all-new school, with a larger number of classmates to befriend and/or kill, and more ways to die if you're not careful. It was released in June 2019.

Check out the official trailer here