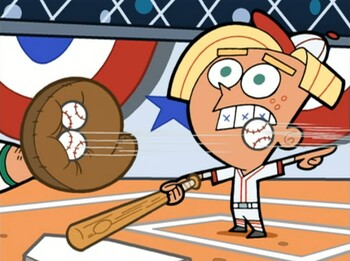 "ONE, TWO, THREE STRIKES, YOU'RE OUT!"
Advertisement:

You have some characters who are athletically gifted. People who have what it takes to become professional sports players or top amateurs, or those who are good and just like to show off for their pals. The ones who their friends envy for their fancy moves. Or you might just have one who isn't as talented as the former two groups, but has enough skill to keep the game competitive. And then you have these characters who can't play a sport or coordinate their body to save their life.

These are the ones who go up to bat in a game of baseball and get struck out quicker than their eyes can blink. The ones who miss the hoops in basketball so badly, the ball falls right into the crowd hitting someone in the face or even in their food. Or if they're playing gridiron football, they can be expected to fumble the ball for the other team or get tackled by a bunch of players just as quickly.

The reasons why they're not so good at sports can vary. They might lack the awareness or coordination needed to play effectively, or they just might not have the focus or grit that it takes to play sports well. These lack of attributes will lead to a lot of embarrassment should they take part in even simply a friendly game. If by any chance they are on a sports team, they will most certainly be The Benchwarmer. Or if playing a game with friends and everyone has to pick their teammates, they can expect to be Picked Last, because the character is so bad, the team leaders dread having that person on the team and choose their people who are more skilled until they inevitably get the short end of the stick. Sometimes if they are involved in the team in any shape or fashion, they will likely end up as the Loser Team Mascot.

Sometimes, those who are bad at sports simply accept their limitations and just find something else they are good at. Other times, those who lack athletic prowess will find a way to suddenly get good. Or at least find a trick that might make them good in one thing to help them win the game. It might be with the help of a mentor (especially a former professional athlete) or they might stumble upon some mystical powers to make them good all of a sudden. Either way, the character will suddenly find success, which may lead their team to the Big Game. There might be some struggles along the way with the player losing their abilities or even the Opposing Sports Team catching on the player and focusing on them as part of the team's strategy. And more often than not, the player will ending up making a move on the last play to help their team win it all. They just might have to ask to Put Me In, Coach!

Drew challenges Danny to a basketball match... But they're both awful.

Drew challenges Danny to a basketball match... But they're both awful.