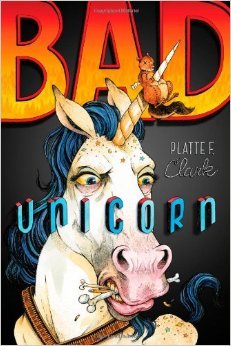 This isn't your typical fantasy novel, in case you couldn't tell from the cover.
Advertisement:

The Bad Unicorn Trilogy is a humorous fantasy trilogy by Platte F. Clark.

The books are, in order:

Middle schooler Max Spencer finds a magical book called The Codex of Infinite Knowability, a book about a fantasy world known as the Magrus. It turns out that the Magrus is real, and it is one of the three realms of the universe, the other 2 being the Techrus (our world), and the Shadrus, a dark and scary place inhabited by nightmarish monsters, led by the Maelshadow. Max is the descendant of Maximillian Sporazo, perhaps the most powerful sorcerer to ever walk the Magrus, and the author of the Codex. When Max accidentally teleports himself, his best friend Dirk, their newfound friend Sarah, and local comic book store owner Dwight (who is actually a dwarf - the fantasy kind) into the Magrus, they must find a way to get home. However, something sinister is brewing...

Princess the Destroyer is a carnivorous unicorn who is tired of eating frobbits and other creatures of the Magrus, and wants something new. So she and her assistant, the wizard Magar, strike a deal with Evil Sorcerer Rezormoor Dreadbringer, who is in league with the Maelshadow: If Princess and Magar capture Max and the Codex and bring them to him, Princess will be allowed to run amok in the Techrus, devouring humans as she pleases.

Our heroes go on a quest to defeat Princess, Rezormoor, and the Maelshadow to save all three worlds. Along the way, Max learns to use magic, makes many new friends (and enemies), and fights foes that are often unusual and quirky for a fantasy series. Although, you'll soon find that nearly the whole series is humorous and twisted.