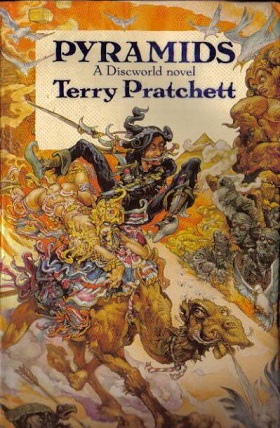 In the land of the lost horizon...
Being trained by the Assassins' Guild in Ankh-Morpork did not fit Teppic for the task assigned to him by fate. He inherited the throne of the desert kingdom of Djelibeybi rather earlier than he expected (his father wasn't too happy about it either), but that was only the beginning of his problems ...
Advertisement:

The seventh Discworld book, and the first standalone story.

Teppic has just graduated from the Ankh-Morpork Guild of Assassins' School, the finest educational establishment on the Disc, when he learns that his father has died and he is now King of Djelibeybi, a tiny backwards state (heavily based on Ancient Egypt) which has long since sold its empire to pay for more pyramids to bury its dead kings in. At first enamoured with the idea of being the king, Teppic soon discovers that it's not quite what it's hyped up to be. A country thousands of years old shows remarkable resistance to change (or plumbing), and Teppic soon begins to yearn for what he left behind. With the help of a surprisingly sharp handmaiden named Ptraci and a camel named You Bastard who is not all he seems, Teppic goes forth with the attempt to escape his own kingdom from the clutches of the domineering High Priest Dios.

Terry Pratchett has quoted the assassin "road test" as one of his favourite sequences, and that he had no idea where it was going while he was writing it.note Back to the test centre, where else would you expect to go?.