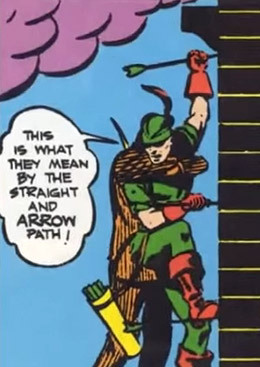 As the name suggests, this is when a sword (or any weapon, improvised or not) is used as a stepping stone, ladder, or perch for a character. Whether it was thrown there (and naturally landed point first and penetrated, whether or not the weapon is made for throwing), shot there, or the character used it to slow his fall, he can then run, jump, spin, or climb off it and get right back into the fight.

This is actually Truth in Television, as this method was used by Frederick Barbarossa's soldiers to climb a crag during the siege of a bandit stronghold on the Adige in northern Italy, as recounted in Otto von Freising's Gesta Friderici. (Spears were used in this case.)

See also The Blade Always Lands Pointy End In, Blade Brake, and Blade Run, which are commonly coupled with this trope. Related to Throwing Your Sword Always Works. When a sword is deliberately plunged into the ground, it's Sword Plant. When one steps on it in midair, it's Projectile Platforms.