Western Animation / Aladdin and the King of Thieves 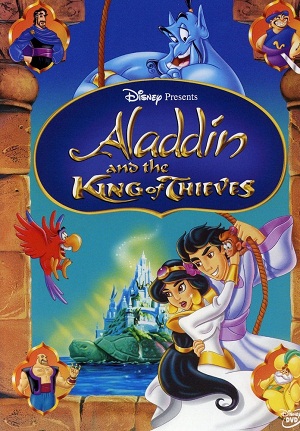 Aladdin and the King of Thieves is the final installment in Disney's Aladdin series, following on from Aladdin: The Series. It was originally released Direct to Video on August 13, 1996.

Aladdin and Jasmine are finally about to get married. Everyone is overjoyed, but Aladdin is saddened by the fact that none of his family can be present, as his mother died when he was young and his father left the family. At the same time, the Forty Thieves is plotting to raid the ceremony and steal all the valuables. The thieves are fought off, after which the heroes discover that they were after a specific artifact — a staff containing an oracle spirit who will truthfully answer a single question. Aladdin discovers that his father has long been trapped in the world of the Forty Thieves, and goes on a quest to rescue him.

Aladdin and the King of Thieves provides examples of: