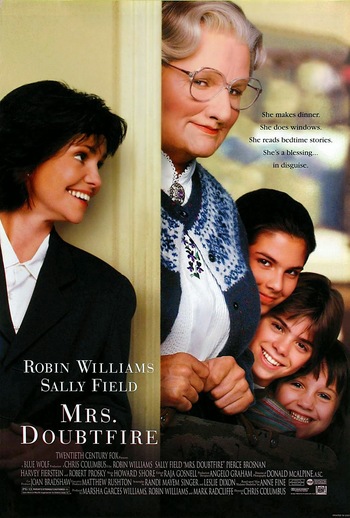 Lydia: Why can't you and Mom just pretend to be happy?
Daniel: We probably could.
Lydia: And we'd still be a family.
Daniel: Yeah, we would be, but we'd be a pretend family, you know? It wouldn't be real.
Advertisement:

Mrs. Doubtfire is a 1993 comedy-drama directed by Chris Columbus and starring Robin Williams, about a man who crossdresses as an elderly British woman in order to see his kids again. It co-stars Sally Field, Pierce Brosnan, Matthew Lawrence, and Mara Wilson.

Daniel Hillard (Williams) is a newly unemployed actor in a rocky marriage. One day, after going behind his wife's back and throwing a wild and expensive birthday party for their son, resulting in their house being trashed, his wife, Miranda (Field), is finally tired of his antics and asks for a divorce. Only allowed to see their three children once a week, Daniel tries to get a new job and shape up his life so that he may receive joint custody. He discovers that Miranda is looking for a nanny to take care of the kids after school. She won't allow him to babysit them, so with the aid of his make-up artist brother, Daniel disguises himself as Mrs. Euphegenia Doubtfire, an elderly, matronly Scottish woman. He is quickly hired by his ex-wife and uses the opportunity to secretly spend time with his children. Things get more complicated, though, as Miranda starts dating an old friend, Stu (Brosnan), and Daniel finds that his family can't bear to part with Mrs. Doubtfire.

The film's story is a rare Twelfth Night Adventure in western media. Based on the book Madame Doubtfirenote called Alias Madame Doubtfire in the USA by Anne Fine, this was one of Robin Williams' biggest hits and finished its theatrical run 2nd behind Home Alone (another Chris Columbus film) as the highest-grossing live-action comedy of all time. The film won the Academy Award for Best Makeup. It was also the last pure comedy (as in, not a dramedy) to win the Golden Globe for Best Comedy until 2009's The Hangover.

A sequel was announced, but in the wake of Robin Williams' death in August 2014, this now seems unlikely.

A stage musical based on the film, with music by Wayne and Karey Kirkpatrick, opened on Broadway on December 5, 2021.