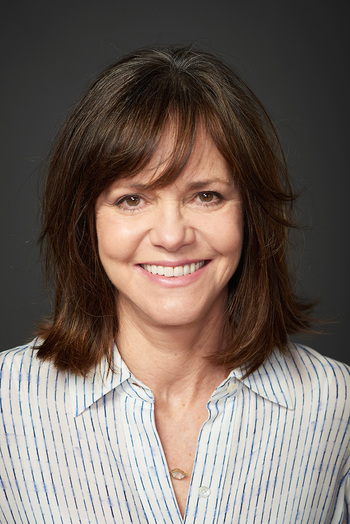 "My agent said, 'You aren't good enough for movies.' I said, 'You're fired.'"
Advertisement:

Sally Margaret Field (born November 6, 1946 in Pasadena, California) is an American actor in film and television.

Field first came to fame starring in the 1960s sitcoms Gidget and The Flying Nun — and has spent the ensuing decades doing her level best to make people forget this. She has won numerous accolades for her work, including two Academy Awards for Best Actress, two Golden Globe Awards, and two Emmy Awards.

She has also worked behind the camera, directing the 1996 made-for-TV movie The Christmas Tree and the 2000 theatrical film Beautiful.

She's been married twice, and had a high-profile relationship with Burt Reynolds in the late '70s and early '80s.