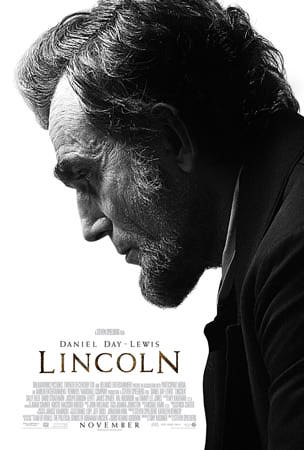 "Shall we stop this bleeding?"
"Do we choose to be born? Or are we fitted to the times we're born into?"
— Abraham Lincoln
Advertisement:

Lincoln is a historical retelling of the 16th President of the United States's attempts to get the Thirteenth Amendment passed, directed by Steven Spielberg and written by Tony Kushner, based on the acclaimed biography Team of Rivals by Doris Kearns Goodwin. It stars Daniel Day-Lewis as Lincoln, Sally Field as Mary Todd Lincoln, Joseph Gordon-Levitt as their son Robert and has a supporting cast that includes Tommy Lee Jones, David Strathairn, Jared Harris and Jackie Earle Haley.

Set during the last four months of President Abraham Lincoln's life, the film's main focus is on his guiding of the political forces in America to end the Civil War and pass the 13th Amendment, thereby abolishing slavery. This is much harder than it sounds, due to the many political divisions not just in the North (to say nothing of the country) at the time, but also in Lincoln's own party. The Radical Republicans led by Representative Thaddeus Stevens demand a strong bill to be passed at all costs, while the more conservative party members led by the Blair family want to hold off until they can try one more chance at negotiating peace with the rebellious South. Throwing complete support behind either side risks the Amendment not getting passed at all, and even with the support of his own party, Lincoln still needs some Democratic support to pass the amendment as well. This sets the stage for a series of behind the scenes maneuvers to sway certain Congressmen to break from their party and vote for the Amendment.

Meanwhile, Lincoln also has to deal with his family issues, particularly his son Robert's demands to enlist over his wife Mary's vehement objections.

The film was given a limited release on November 9, 2012 before opening wide on the 16th and becoming a robust box office hit for a historical political drama. The trailer can be viewed here