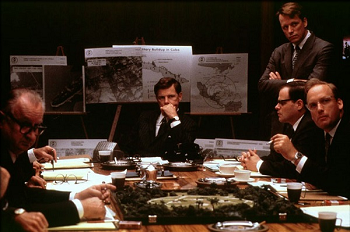 We have met the Government Conspiracy, and it is us! The main characters are The Government (or at least part of it) — in The White House, Whitehall, the Governor's mansion, a Covert Group, or bureaucrats elsewhere. Variations range from Sitcom to Prime Time Soap with political trappings to topical Ripped from the Headlines drama.

If the story is more of a character drama focusing on one leader in particular, see Ruler Protagonist.