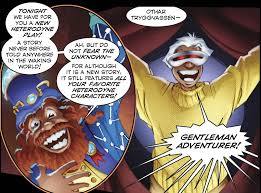 Gentleman Adventurer!!!
"In the name of Robert of the House Baratheon, the First of His Name, King of the Andals and the Rhoynar and the First Men, Lord of the Seven Kingdoms and Protector of the Realm, I, Eddard, of the House Stark, Lord of Winterfell and Warden of the North, sentence you to die."
— Eddard Stark, Game of Thrones
Advertisement:

The offspring of both Large Ham and Insistent Terminology, this is when a character has some sort of title appended (loudly) to their name. This is typically done by the character in question whenever they introduce themselves (assuming they introduce themselves enough times to count as this trope), however the effect can also be achieved by consistent Boss Subtitles or some sort of lackey giving it for them. Memetic Mutation can lead to fans creating one by always using their name with the title even if the title isn't normally appended to their name in-universe.

The Magnificent might do this, depending on how they feel about their title. If other characters append the title then it's also an example of Phrase Catcher. If they do it themselves then it's (naturally) their Catchphrase.

Remember that simply having a title and using it once or twice doesn't count; the character or someone else must keep using it as part of their name.

See also Red Baron, They Call Me MISTER Tibbs!, Try to Fit THAT on a Business Card!, I Am the Noun. Compare Verbal Business Card. Contrast Just the First Citizen.

"Who Am I?" Shouts His Name

Upon losing his temper after Yuki scares him again, "Who Am I?" proclaims to the sky by shouting his own name.

"Who Am I?" Shouts His Name

Upon losing his temper after Yuki scares him again, "Who Am I?" proclaims to the sky by shouting his own name.