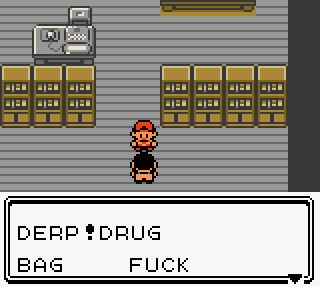 Yes, the whole game is like this.
Professor Oak: GO TO THE ELF'S WORLD WELCOME! EVERYONE CALL ME ELF MONSTER
Advertisement:

Pokémon Vietnamese Crystal is a bootleg copy of Pokémon Crystal, infamous because of its Translation Train Wreck which renders it nearly incomprehensible to any English speaker.

The name originates from an ExtraLives

charity marathon run by Monotone Tim, where a viewer sent in a copy of the game which was bought in Vietnam.

For those interested in playing it, Romhacking.net has a patch

for it, which is meant to be applied to a ROM of the Japanese version of Pokémon Crystal (which can't be provided here due to legal reasons). DeviantArt user Elfcoach has created a patch

for Japanese versions of HeartGold or SoulSilver that turns them into what is essentially a Video Game Remake of Vietnamese Crystal, complete with Engrish translations of new dialogue and Pokémon and move names. The same user has also retranslated Emerald and Platinum in a similar manner, dubbing them Viet Emerald

a "spiritual cousin" that goes by the name of Pokémon Chinese Emerald.

Note: Only tropes pertaining to this particular translation should be listed here. All tropes for the original game can be found on its own page.

WHAT DON'T STARE ME ALWAYS!