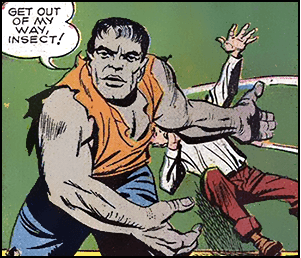 Bugs are small. Bugs can be annoying. And bugs are easily squishable, given the right tools. So what better way is there to insult an opponent you don't want to be bothered with anymore? By comparing them to a bug (or worm, or maggot, or something else that crawls along the ground and can easily be stepped on), of course.

This is a favored technique among very powerful and/or very arrogant villains to intimidate their opponent or devalue their abilities before their climactic battle. More savvy heroes tend to shrug this off as lame posturing, but a bad guy will still throw this in from time to time, if only to make himself sound cool. This can be hammy, especially if you stop to think of what that would actually look like if it were a normal human saying it to an actual bug.

Note that some Worms are less pitiful than others.

See also the Drill Sergeant Nasty, who uses this as a "motivational" tool ("You call that an insult, maggot?!"), If a character thinks of everyone this way, that's Humans Are Insects. Also compare Your Little Dismissive Diminutive.