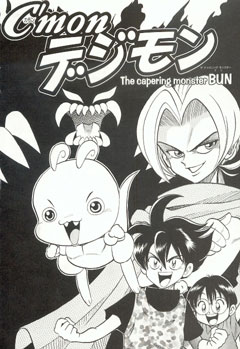 C'mon Digimon, penned by Hiroshi Izawa and released in mid-1997 for Akamaru Jump shortly before the debut of its first virtual pet, was a sort of "beta version" of Digimon V-Tamer 01, eventually released as a bonus chapter in its second volume.

Shinichiro Josaki is the privileged son of the owner of Josaki Electronis. His hobby is to challenge people to Digimon V-Pet battles, defeats them ruthlessly with his Deathmon, and rub his victory in by crushing the opponent's V-Pets under his foot. Meanwhile, after a friendly V-Pet battle with some friends, Makoto Abe encounters Kentaro Kamon, well-known for his apparent disdain of animals, being the only person without a V-Pet and for getting into a fight with some high schoolers. Makoto discovers he picked up a V-Pet on the street, though Kentaro insists that he hates the things and tries to press it onto Makoto. Makoto uses a 3D virtual projection machine constructed by his brother to bring to life the V-Pet's contents, a so-called defective "Damemon" by the name of Bun, and Kentaro reluctantly adopts it.

Not happy in being strong-armed into owning Bun, Kentaro intends to hand him back to Makoto. However, Makato has been kidnapped by Shinichiro, who defeats his Greymon and, after revealing he extensively researches the background and strength of his V-Pet opponents, destroys the V-Pet. Furious, Kentaro and Bun swear to defeat him in ten days' time.