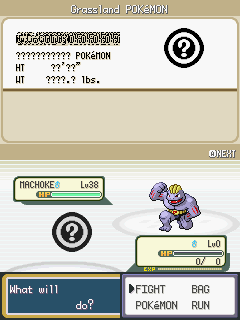 note Also known as 'Ten question marks' and Decamarks.
A Glitch Entity is a Video Game item or character whose very existence is actually just a flaw in the game's internal programming. Can be considered a Good Bad Bug in and of itself, but all bets are off.
Advertisement:

May be found in a Minus World, and often exists for the same sort of reason — the game accidentally tries to load character data from a section of memory that is intended for some other purpose entirely, leading to the resulting "character" appearing. If a Glitch Entity is noticeably more powerful than anything obtainable at the point in the game that it can be gotten, using it treads into Not the Intended Use territory.

Because this character was never intended to actually exist, merely encountering the Glitch Entity can trigger an unpredictable bevy of side effects, ranging from other Good Bad Bugs to game crashes, or even more severe bugs. In the rare worst-case scenario, it can even corrupt the player's save file, forcing them to erase it and start the game over from the beginning. Some Glitch Entities can eventually become an Ascended Glitch, though.

There also exist In-Universe examples, characters who are living glitches, usually used to explore the concept and how they interact with the world they are in. They can range from benevolent characters to mischievous tricksters to malicious Digital Abominations.

Yes, they have floating hands. But as Scrapeface demonstrates, trying to separate them from their bodies is a terrible idea.

Yes, they have floating hands. But as Scrapeface demonstrates, trying to separate them from their bodies is a terrible idea.