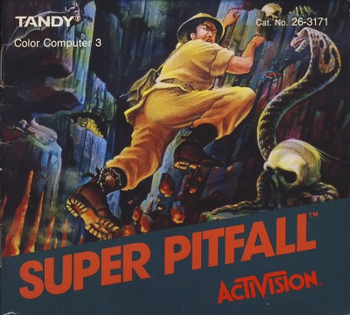 Now with 100% less rock climbing.
Super Pitfall is the sequel to the Game Crash denyingly popular Pitfall II: The Lost Caverns, and was released for the NES, Tandy, and PC-8801 systems. Super Pitfall would be the last of the original style of Pitfall games, as the series shifted from open world to level-by-level with 1994's Pitfall The Mayan Adventure, which was released for SNES and Genesis.
Advertisement:

The gameplay vastly builds on its predecessor, keeping most of the elements of Pitfall II except for the eel and insect monsters. The game featured omnidirectional scrolling, and was one of the first NES games ever to do so. The layout was far more complex than its predecessor, many new monsters were added, and there were a total of five maps to explore. There were also visible differences in sediment as the player got deeper, a feature ubiquitous with Minecraft style games.

However, the game was also known for its many glitches — things popping in and out of view, clipping issues, and the like. The invisible items were also somewhat base breaking. As a result, the game received mixed reception, and generally fell into obscurity until the Angry Video Game Nerd featured it

in 2009. Although generally lambasting it in his review, he went on to play the second quest, reflecting said mixed reception.

Of note, a planned sequel was once considered as a localization of Atlantis no Nazo, another game centered around treasure collection and exploration, but this was abandoned. A video of the prototype can be found here

Tropes for the original game include:

Tropes for the fan-made 30th Anniversary Edition include: 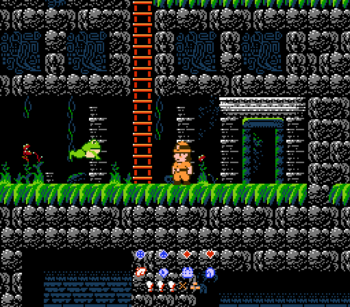