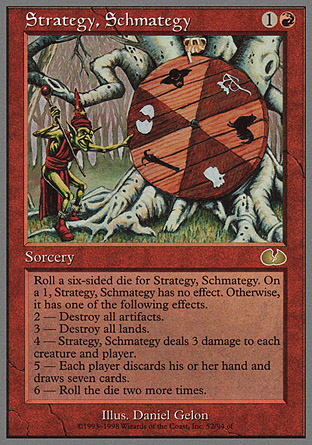 "Magic is not an exact science!"
"Yes, spin the wheel, you fools. See what horrors are in store for you."
[activates ÜberCharge spell]
"You are GODS! I... meant to do that. It will go badly for you. You watch.
Eh he... I don't know why I put that on the wheel."
— Merasmus, Team Fortress 2
Advertisement:

Sometimes, even heroes like to live on the edge.

A Random Effect Spell is just that — a spell or item in a video game that pulls from a pool of random effects, instead of doing the same thing every time. Often (but not always) granted as a late-game spell or ability, or difficult to come by, the Random Effect Spell's effects can run the gauntlet from "really cool" to "really lame". How big the effect pool is can depend on the item or spell, though frequently, at least one or two of them will be a duplicate of an already-existing spell or ability (if not all of them). Frequently, at least one possible effect of the spell will be completely amazing (such as dealing massive damage to all enemies), but another will be completely horrible (such as cutting all your characters' health in half). Also frequent is one option which does absolutely nothing. Whether the risk is worth it generally depends on the ratio of good effects to bad ones in the pool, the cost of the ability, and how many (and how strong) the enemies are you facing. Of course if you are playing on an emulator or Save Scumming is otherwise available, you can just keep resetting until you get the right luck.

Due to its random nature, it is frequently Awesome, but Impractical and a Useless Useful Spell, but not always. If there are enough good effects, they can easily be a Lethal Joke Item or spell. If the randomness results from the spell being miscast, then that's Magic Misfire. Compare Randomized Damage Attack where it's only the damage that is random, but the effect stays the same - although they may overlap if one effect yield greater damage than the other.

Troper General's Note: Many spells or items in video games (and other games) have an element of randomness to them to keep things unpredictable — such as the additional damage from one spell being randomized, or one spell possibly being able to inflict a number of status effects. However, for the purposes of this trope, we are mainly concerned about examples whose primary purpose or effect is the randomness.