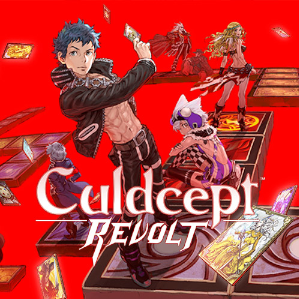 Culdcept is a series of games developed by OmiyaSoft. The gameplay is an odd mix of Monopoly and a CCG. The players roll dice and move around a game board, needing to pass through one or more forts before returning to the castle, which acts similar to Go! from Monopoly. However, instead of simply buying property you place monsters from your hand on the spaces and opposing players can choose to fight them to try and get out of tolls. The more you upgrade a property, the higher the toll and the better protected the monster on it. Also included are a huge number of spells and item cards that can affect gameplay in many ways.

The original game, Culdcept, was developed for the Sega Saturn and later released on the PlayStation. The original never left Japan Culdcept Second was released for the Sega Dreamcast and later the PS2, the PS2 version released in other countries as just Culdcept. The latest entry in the series was Culdcept Saga, strangely released only for the Xbox 360 in 2008. Finally, there is a Culdcept DS but...

Its followup, Culdcept Revolt was released for the 3DS on October 3rd, 2017.

The basic story is that Culdra, absolute Goddess, created Culdcept, the Book of Creation and Destruction. She then scatters pieces of the book, the cards, across the world and people who can control them become Cepters. If a Cepter passes certain trials, they become the god of a new world that they create. Each game also includes a story, usually involving beating someone evil to the godhood thing, and always peppered with oddball minions and elementally themed tribes.

The Culdcept series provides examples of: