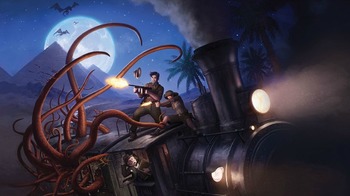 "The world is indeed comic, but the joke is on mankind." - H.P. Lovecraft
Advertisement:

Eldritch Horror is a board game spinoff of Arkham Horror from Fantasy Flight Games. Like Arkham Horror, it is an Adventure Board Game based on the Cthulhu Mythos, and the two games share many mechanics. Set in the 1920s, Eldritch Horror is a cooperative game in which players take on the roles of investigators and travel the world solving mysteries in an attempt to stop the Ancient One from awakening.

Despite its much larger scale (the entire globe as opposed to just one city and some smaller, surrounding towns), Eldritch Horror is actually a quicker game than Arkham Horror.

Eldritch Horror shares many tropes both with the greater Cthulhu Mythos and Arkham Horror. The board game directly features examples of: