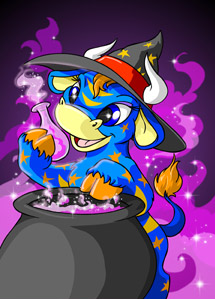 About as magical and starry as it gets.
"A pentacle is a symbol of order," I said quietly. "Five points, five sides. It represents the forces of air, earth, water, fire, and spirit. It's contained within a circle, the points touching the outer ring. It represents the forces of magic bound within human control. Power balanced with restraint." I gestured at the symbol. "See here? The points of the star fall far outside the ring."
[...]
I shrugged. "Off the top of my head? This looks uncomfortably like a combination of the pentacle and the anarchy symbol. Magic unrestrained."
— The Dresden Files: Small Favor
Advertisement:

Humanity has been fascinated by space for thousands of years, and it's often associated with the unknown. Thus, magic is often associated with stars as a symbol, usually the traditional five-pointed star. Use of these symbols can range from starry patterns on the Robe and Wizard Hat to pentagrams being used in Satanic rituals.

Related to Star Power and Space Is Magic when stars themselves are magical, Star-Shaped Coupon when a plot coupon is star-shaped, and Star-Spangled Spandex and Celestial Body for starry wizard robes. Also see Wish Upon a Shooting Star for wishing on stars. Subtrope of Cosmic Motifs.