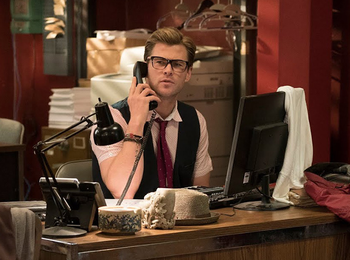 Behind every powerful man (or woman, occasionally), there is a secretary, assistant, or aide to keep his schedule and organize the paperwork. This character is usually calm and meticulous, is likely to wear a crisply pressed suit, and may add a pair of dashing glasses. In other words, they're a perfect excuse to throw in a little Fanservice. Because Most Writers Are Male, this tends to take the form of the Sexy Secretary, but sometimes (especially in works that lean towards a female audience), it'll be an attractive guy: the Right-Hand Hottie.
Advertisement:

If the boss is also a hot guy, there's opportunity for Ho Yay via Subordinate Excuse, for additional Mr. Fanservice value.

Despite the name, this doesn't need to be The Dragon, even if Evil Is Sexy comes into play.

Spear Counterpart to the Sexy Secretary. If they are more than fanservice they function as The Face.