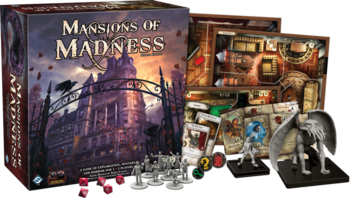 Don't go in the house!
Advertisement:

Mansions of Madness is a horror-themed Adventure Board Game drawing on the same familiar Cthulhu Mythos settings established in Arkham Horror and its related tie-ins.

The game presents one of several dynamic story-driven scenarios. Your crew of investigators have been given a tip-off of some dark occurrences at a remote estate (or town, or museum, or...). Arriving on scene, you will poke around looking for evidence, either to bring back to the proper authorities or tell you what can be done immediately to stop the evil plot. Of course, an unknown house full of horrors and secrets stands in your way, and even if you manage to find what you need or stop the dark forces, they certainly won't let you escape intact...

Published by Fantasy Flight Games in 2011, Mansions of Madness received a couple Expansion Packs and several add-on scenarios. A second edition was released in 2016, with the biggest change replacing the role of keeper player with a required companion app. This would make the game fully cooperative or playable solo, and allowed for some replayability with the app able to add random changes to the scenario or the map. A conversion kit was included for owners of the first edition to make use of the figures and map segments in the previous box. The second edition now has four full expansion packs, a number of downloadable scenario additions, and a thriving homebrew community that has released many custom scenarios through their own app.