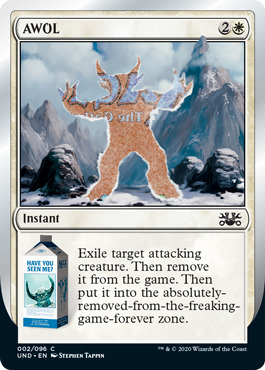 Welp, guess that card of mine can never be used ever again. Not even in future games.
"We've got to verify it legally to see if she is morally, ethically, spiritually, physically, positively, absolutely, undeniably, and reliably dead."
— The Munchkins, The Wizard of Oz, about the Wicked Witch of the East
Advertisement:

Death is permanent, as we all know. Because people die if they are killed. At least, they do in Real Life. In fictional works, however, this need not necessarily apply. In fiction, people regularly do come Back from the Dead. This is fine if they're on the side of the heroes, but once a villain has pulled this a couple of times, it gets really old. When Death Is Cheap, it cheapens the suspense of wondering if someone's going to die, after all.

There's only one solution when death is not enough. It's time to kill that guy so thoroughly, he becomes Deader Than Dead.

The actual implementation of Deader Than Dead varies. Sometimes it requires killing more than one component of the target, often its soul and its body at the same time. Sometimes it requires following the dead to the afterlife and killing them there. Sometimes it involves tons and tons of Maximum Overkill that reduces the villain to a fine paste or even less. Sometimes it involves having to kill them in a special way, or with a particular weapon. Sometimes it involves a sworn affidavit declaring they will never return. And sometimes, a particularly nasty alternative to death has to be found. For demons and the like, the latter often means "sealing" them somewhere, though more often than not, this is just a surefire way to end up with Sealed Evil in a Can. Your Soul is Mine! is an uncommon way of ensuring total death as well — pulling someone's literal life force out of their body and eating or smashing it is a good way to ensure that they're never coming back. On the other hand, if it's a story where resurrection requires a (mostly) intact body, it's simply a matter of making sure the body isn't intact.

Characters who come back from the dead while staying dead (i.e., the Undead) are a special case, but of course, being "dead" also has a very special meaning in this case.

If you have to rely on this trope often, it tells you that you have cheapened the meaning of "death" to the point of uselessness. Relying on it after you have already pulled it for the same character tells you that maybe you're lacking in imagination to come up with good characters.

Or it might be that the character is too popular or iconic (to the fans or the writer) to stay permanently dead. So, it's not really that surprising when they pull something out of left field and let someone use Time Travel to...

Common for important bosses in video games (see Non-Lethal K.O.), but not rare outside them either. Compare with Permadeath and Rasputinian Death. Common ingredient in a Death by Origin Story. Often related to Cessation of Existence. This may be the function of an Immortal Breaker — it causes any being to be completely obviated from existence (especially important if the immortal in question has Resurrective Immortality).

Older Than They Think — a Fairy Tale may outline the villain's death in graphic detail to ensure that, unlike the hero, they cannot come Back from the Dead. (Often, the Family-Unfriendly Death is proposed by the villain as a suitable punishment for his crimes, as a general principle.)

Despite the similar sounding name, not related to Harder Than Hard, although the attempt to kill someone Deader Than Dead is by no means easy. Related to Killed Off for Real, which results when the audience would have expected the Deader Than Dead character to come back.

Chicharron experiences the "Final Death", which happens when there's no one left in the living world who remembers a deceased relative of theirs.

Chicharron experiences the "Final Death", which happens when there's no one left in the living world who remembers a deceased relative of theirs.