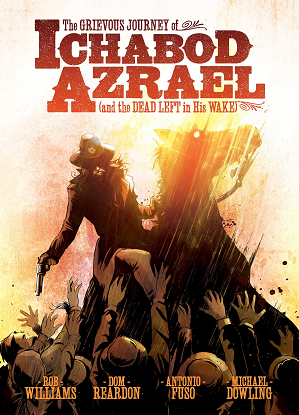 The Grievous Journey of Ichabod Azrael (and the Dead Left in his Wake) is a Bangsian fantasy comic from 2000 AD.

Ichabod Azrael was a cruel and murderous man who was once the most feared gunslinger in The Wild West until one day he met his demise after a shootout with a mob of enforcers sent after him to deliver justice. Ichabod wakes up in the afterlife, a world deprived of color and guarded by blurry horsemen. Finding that his gun somehow still works against these demons, Ichabod sets out on a journey to escape this Purgatory and return to his woman Zoe, the only thing he ever loved in the world of the living.

The series crossed over with Judge Dredd in the "End of Days" storyline with Ichabod crossing over to Dredd's world to stop the Horsemen of the Apocalypse.

Alternative Title(s): The Grievous Journey Of Ichabod Azrael And The Dead Left In His Wake