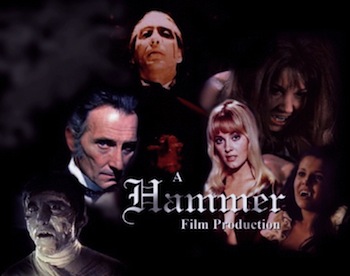 The Hammer Horror films are a series of Gothic Horror movies made by the British company Hammer Film Productions between the 1950s and the early '70s. The name is sometimes applied to similar films from the same era made by other small (often British) companies.

The films were distributed by studios including Warner Bros., Columbia Pictures, and Universal Pictures. The films mostly re-invented the 'classic' horror movie characters previously given form by Universal themselves in the 1930s and '40s (Dracula, Frankenstein and his Monster, The Werewolf, The Mummy), putting them into colour (often very lurid colour) and adding some new twists. The reinventions were so popular that the modern public image of many of these characters has kept some Hammer elements. For example, the popular conception of Dracula, as seen in so many cartoons, wears full evening dress and talks with a Hungarian accent, like Bela Lugosi's portrayal for Universal, but he is also over six feet tall and lean with red eyes, long fangs and a widow's peak, which more closely resembles Christopher Lee's Hammer Dracula.

The Hammer films included a "stable" of regular actors, one or two of whom (at least) would appear in each major performance. The most famous of the stable were Christopher Lee, Peter Cushing, Oliver Reed and Ingrid Pitt. The style was well plotted but still reassuringly predictable. As Terry Pratchett put it, "You knew just what you were going to get." Just to add to the confusion, other Brithorror studios— notably Amicus Productions and Tigon British Film Productions— borrowed actors from Hammer (as well as other staff such as cinematographer/director Freddie Francis).

A common assumption was that Vincent Price did Hammer Horror as well. In fact his films were for other studios (such as his popular Edgar Allan Poe adaptations, made for Roger Corman and American International Pictures), though he did star alongside Lee and Cushing in many other films, and was good friends with them.note Price and Lee were also both born on 27 May (Price in 1911, Lee in 1922), while Cushing was born on 26 May 1913. Eerie. Price did do a few British horror films, notably Witchfinder General for Tigon, and Scream and Scream Again (a Tigon/AIP co-production).

Terry Pratchett's love of Hammer films was a source of much inspiration for the Discworld country of Überwald, where every count is a vampire, every baron a werewolf, and every doctor is a Mad Scientist, and each of them is served by a specimen of The Igor clan. You can also see many of the old clichés lovingly spoofed in Aardman's animated Wallace & Gromit: Curse of the Were-Rabbit. One of the most fondly regarded periods of Doctor Who is the "gothic" period of Season 12-14 (with Tom Baker), which swiped Hammer Horror tropes and monsters and Doctorised them. Tobe Hooper's vampire flick Lifeforce was dreamed up as a "70mm Hammer Film" and Tim Burton's Sleepy Hollow (1999) is basically an American equivalent, even featuring Christopher Lee and Michael Gough. Dracula: Dead and Loving It pays loving tribute to Hammer the way Young Frankenstein did the Universal films, and the Fright Night (1985) films are more serious, though still tongue-in-cheek homages with Roddy McDowall as an extremely Peter Cushing-esque vampire hunter. Guillermo del Toro is a lifelong Hammer fan and admitted to styling his gothic ghost films The Devil's Backbone and especially Crimson Peak as throwbacks. Steve Coogan, a horror nerd, created the Dr. Terrible's House of Horrible to Pastiche Hammer films, as well as similar ones by their rival Amicus Productions. Meanwhile in Japan, Vampire Hunter D and Castlevania draw strong influence from Hammer's stylings and traditions. Infact, Hammer Horror was so popular in Japan Toho ended up making it's own Hammer Horror derivative series of Vampire movies known informally as the "Bloodthirst" trilogy. On the other hand, The Wicker Man (1973) was essentially made as an anti-Hammer film, deliberately shying away from onscreen gore or stereotypical gothic scenery despite featuring Hammer regulars Christopher Lee and Ingrid Pitt.

Early films in the series were basic, Universal-type horror stories done in colour, but as time went on the studio found themselves in greater competition with American studios who had bigger budgets and better special effects. Hammer retaliated by increasing the sex content of their films so that starting in the late '60s and continuing into the mid '70s Hammer films had more nudity than most horror films even today. The contrast can be seen in their two adaptations of Dennis Wheatley black magic tales. In The Devil Rides Out (written 1963, released 1968, based on Dennis Wheatley's 1934 horror thriller) the satanic orgy features characters robed from neck to ankle dancing in a manner no wilder than teenagers at a modern nightclub, To the Devil, a Daughter (1976) features full-frontal nudity, sex scenes and a gory birth scene, all in an attempt to win back an audience who had seen Rosemary's Baby, The Exorcist and The Texas Chain Saw Massacre (1974) and wouldn't be impressed by counts in coffins any more. It didn't really work. Hammer stopped making movies after that and went on to their two '80s TV series, Hammer House of Horror and Hammer House of Mystery and Suspense.

Another cute feature of the series was that they never just numbered the sequels, instead they thought of an ever more lurid title: Horror of Dracula was followed by The Brides of Dracula, Dracula: Prince of Darkness, Dracula: Has Risen from the Grave, Taste the Blood of Dracula, The Satanic Rites of Dracula , etc.

Hammer produced a series of thirteen hour-long horror stories Hammer House of Horror for British television in 1980. Hammer House of Mystery and Suspense followed in 1984.

Hammer Horror Has Risen from The Grave

Like its most famous character, you can't keep a movie studio dead. A new Hammer horror has been produced

In 2012, they released The Woman in Black, starring Daniel Radcliffe. Other projects from the new Hammer include The Resident (which features Hammer alumnus Christopher Lee in a supporting role) and Wake Wood. In 2014, they produced The Quiet Ones.

it would be producing comics based on the Hammer horror titles.

For horror with actual hammers, see Drop the Hammer.

List of Hammer works with pages on this wiki:

The remaining films, or the franchise as a whole, contained examples of such tropes as: