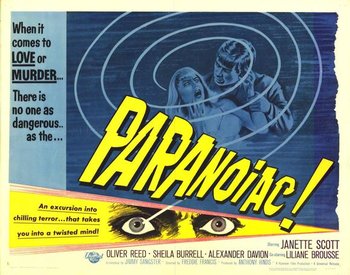 Paranoiac is a 1963 thriller from Hammer studios.

Tony Ashby (Alexander Davion), who has been thought to have killed himself years ago, returns to his home, much to the joy of his sister Eleanor (Janette Scott) and displeasure of his brother Simon (Oliver Reed). He is in fact an impostor set by the son of Ashby family's lawyer to con them out of their money. However, the impostor starts developing feelings for Eleanor, and becomes entangled in the Ashby family's secrets.

Loosely inspired by the novel Brat Farrar, which is more of a Cozy Mystery; the film is a lot more gothic.

Unrelated to the 2011 freeware horror game of the same name. Or to the tabletop game Paranoia.