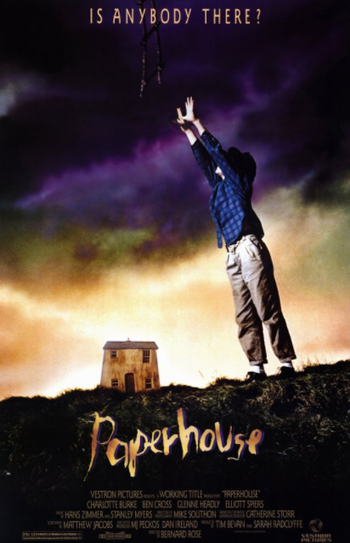 In class, Anna Madden (Charlotte Burke) draws a picture of a house. After being sent to stand in the corridor for misbehaviour, she faints, and dreams of a sloping coastal moor, atop which looms a house. She then succumbs to a fever, whose recurring dreams bring her back to the foreboding scene. On house call, Dr Nicols (Gemma Jones) mentions a boy in her care who has trouble walking. Anna draws in the house’s upstairs window the face of a boy. In another dreamed visit to the house, its upstairs window reveals young Marc (Elliot Spiers), who announces the house to be bereft of stairs.

On separate paper, Anna draws an interior for the house, and on subsequent visits, becomes acquainted with Marc, who can't walk. Frustrated by the absence of her Dad (Ben Cross), Anna adds his graphite likeness to the house, scribbles over it, and scrunches it up, whereupon mother Kate (Glenne Headly) unwittingly throws the paper out. On her next dreamed visit to the house, Anna finds it to be in disarray — while outside waits a surreally disfigured version of her Dad...