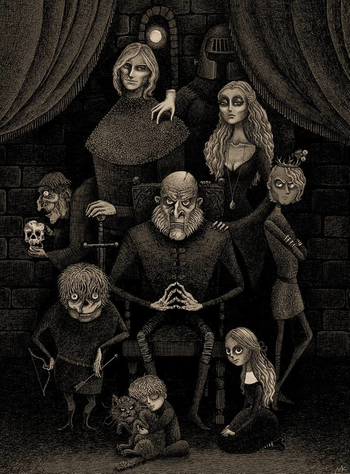 ). Used with permission.
"Never trust a relative. It is far worse than trusting strangers. With a stranger, there is a possibility that you might be safe."
— Corwin, The Chronicles of Amber
Advertisement:

This is the big family with issues, from which many, many kinds of Freudian Excuse can be taken. It's often very wealthy and powerful, when it's not royalty, and has many traditions. They have secrets, skeletons in their cupboards (sometimes literally) and are overly proud of their long (and bloody) history. Abusive behaviors of some kind are almost certain to have occurred. While they may display affectionate behaviors as well, to them Cain and Abel is a way of life — though if you piss off one of them, the rest will instantly band together to destroy you in order to uphold Family Honor.

They're very likely to feature at least one Magnificent Bastard, Evil Matriarch, Manipulative Bastard, "Well Done, Son!" Guy, Unfavorite or Black Sheep. There may be a Lady Drunk. While not frequent, Brother–Sister Incest and other kinds of canonical incest are most likely to be featured within this family. They also like to wage war with other families. Decadent Courts typically feature several of them. If they've been screwed up for a while, they're likely to have a Tangled Family Tree.

This family is often contrasted by the existence of a more traditional, if poorer, family, where everyone loves and supports each other despite occasional bickering. Compare the Dysfunctional Family, where the infighting tends to happen over more mundane issues instead of tradition, status or anything of the sort.

A subtrope of The Clan. See also Royally Screwed Up, It Runs in the Family, Dysfunction Junction and Formerly Friendly Family. Contrast Thicker Than Water. If the family is screwed up in the narrative sense, because of complexity, Continuity Snarls and the like, see Tangled Family Tree instead.