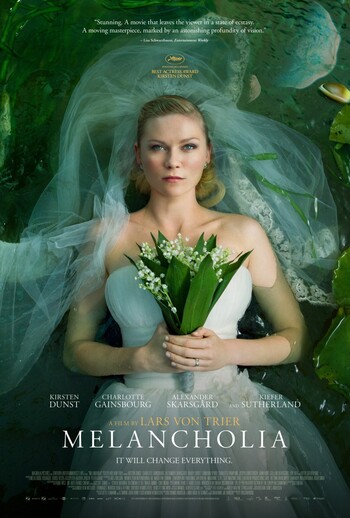 "Life is only on Earth. And not for long."
"Enjoy it while it lasts."
—Gabynote Initially said to Justine about her marriage, later retooled into a tagline for the film, turning "it" into (life on) Earth
Advertisement:

Melancholia is a 2011 Speculative Fiction film written and directed by Lars von Trier.

It mainly focuses on the relationship between two sisters, the pessimistic Justine and the neurotic Claire, played respectively by Kirsten Dunst and Charlotte Gainsbourg. The movie is divided into two parts, the first about Justine's wedding (and its progressive lapse into disarray), and the second about the upcoming fly-by of the rogue planet Melancholia that's drifting through the solar system. The focus lies on how the characters relate to the events surrounding them, from the mundane event of a wedding to the possibility of a planetary collision.

Like Von Trier's previous movie, Melancholia premiered at the Cannes Film Festival, won the Best Actress award for its lead female (Dunst), and became surrounded by considerable consternation. This time, it was a result of Von Trier joking about Adolf Hitler and Nazi Germany at a press conference, which led to him being declared a persona non grata, essentially giving him a 100-meter restraining order from the festival's venuenote In 2017, however, this ban might have been lifted

The second installment of Von Trier's "depression" trilogy, between Antichrist and Nymphomaniac.