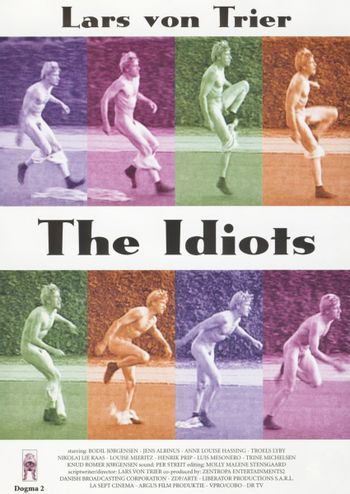 Idioterne, released internationally as The Idiots, is a 1998 Danish film written and directed by the ever-infamous Lars von Trier. The film was the second officially released Dogme '95 film after Thomas Vinterberg's The Celebration.

The story opens with a shy woman, Karen (Bodil Jørgensen), sitting in a fancy restaraunt. Suddenly, the establishment is disturbed by the behaviour of two apparently mentally ill men. The men (and their carer) are promptly asked to leave, but on the way out, one of the men notices Karen and decides to hold her hand, forcing the timid lady to go with them. Upon leaving however, it is revealed that the two men aren't mentally handicapped at all. They were just faking it, seemingly For the Lulz.

Black Hilarity Ensues as Karen and ourselves are introduced to a larger group of "idiots" or "spassers" and their lives in a series of episodes of varying moods.