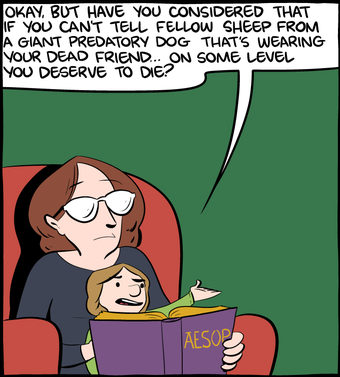 Yeah, you've kinda got a point there, kid.
Bashir: But the point [of "The Boy Who Cried Wolf"] is, if you lie all the time, nobody's going to believe you, even when you're telling the truth.
Garak: Are you sure that's the point, Doctor?
Bashir: Of course; what else could it be?
Garak: That you should never tell the same lie twice.
— Star Trek: Deep Space Nine

A Sister Trope to Alternative Character Interpretation, this refers to when the entire moral message of a story is subject to a strong kind of Fridge Logic. As in, while the characters may interpret the Aesop a certain specific way and the writer has also intended for the audience to see it as such, the audience may end up scratching their heads and noting that if the characters had followed a different course of action, they could have avoided most of the complications of the story just as easily.

Again, interpretations are not entirely official and/or logical. It also doesn't have to be a Broken or Clueless Aesop if the realization is positive, although it certainly can be.

Sometimes leads to Unfortunate Implications. For the weasel-worded, Accentuate the Negative troper version, see Warp That Aesop. An in-universe version can be a Spoof Aesop. If an Aesop's overt message is subverted by the story, it's a Broken Aesop, which some (but not all) of the examples below may be.

See also Accidental Aesop, for when An Aesop isn't intended, but fans manage to find one anyway. May involve Glurge.