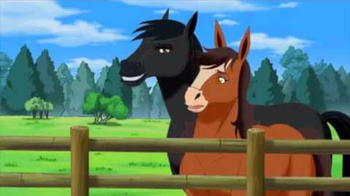 Dream Come True (A Mule Mom's Story) is a short animated film of unknown origin (outside of the sound editor uploading it) about equines on a farm. The film was made to advertise a program

The film starts off introducing the farm. Soon, a coyote starts prowling the farm but neither the farm dog Cowboy or farm owner Jim can scare it off. To keep the coyote out of his stables, the farmer buys a donkey stallion. Jack repeatedly fights off the coyote until he stops coming to the farm. Due to his efforts, Jack receives acclaim on the farm. A horse mare named Elizabeth falls in love with him and the two end up having a foal named Flo. Flo grows up into a pretty but lonely mare. Most of the other horses don't accept her for being a mule. The farmer, believing Flo needs companionship, decides to artificially inseminate her with a foal. Happy to see the Gypsy King's blood is living on through Flo, she and her foal are finally accepted on the farm.

The full short can officially be seen here

. Bobsheaux's review of it can be found here