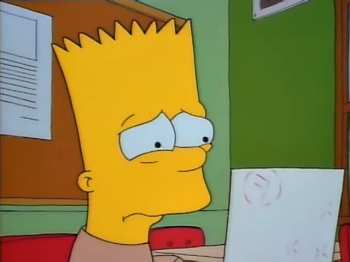 "This is as good as I could do, and I still failed..."
"Okay, okay! Why are we dancing around the obvious? I know it, you know it. I am dumb, okay? Dumb as a post! Think I’m happy about it?"
—Bart
Advertisement:

Airing on Thursday evenings at this point and successfully competing with the still-untouchable The Cosby Show, "Bart Gets an 'F'" would be a milestone in the history of The Simpsons. Not only was this new series entering its second season, but it was the start of a season that would solidify the success of what is now the longest-running animated prime-time series in television history.

And to think that one of the major reasons for the success of The Simpsons was the central character of this, the season premiere: Slacker, wisecracking bad-boy Bart, whose very personality traits result in this episode's crisis: Bart, unable to study, concentrate or perform well in the classroom on even routine assignments, falls into danger of being retained to the fourth grade.

The episode begins with Bart being asked to present his book report. He announces his subject as Treasure Island, but all his report is ad-libbed bull, and when it becomes clear he did not read the book, his teacher, Edna Krabappel, confirms her suspicions by having him name the main pirate (Long John Silver), which Bart is unable to do. Mrs. Krabappel keeps Bart after school, and then tells him in no uncertain terms that if he does not improve his academic performance quickly, adding to his worries that there is a challenging test on Colonial America coming up, he will be in danger of flunking fourth grade; Bart is distracted and doesn't hear a word his teacher has said. Bart goes home and tries to study, but is continually distracted by such things as a video game and a monster movie on TV. The next day at school, Bart, realizing he is unprepared for the test, fakes an illness to go home early. He later calls Milhouse to get the answers to the test, but the information proves useless, as Bart gets his "F" with an apparently worse score than Milhouse. Homer and Marge are called to school to meet with Dr. Pryor and Mrs. Krabappel, all whom are concerned about Bart's poor academic habits and performance, and everyone agrees that it may be in Bart's best interest to repeat the fourth grade.

Bart, who is asked to be at the conference, objects to Dr. Pryor's recommendation and vows to do whatever he can to do better. To accomplish this goal, Bart asks his sworn nemesis, the nerdy Martin Prince, to tutor him. Martin agrees to help out under the condition that Bart promises to help make him cool. After a while, Martin decides to back out on his end of the bargain when he does become cool for the first time and discovering that being a slacker and prankster is more entertaining than studying. Left with no other alternative, Bart tearfully and earnestly prays to God to give him one more day to study.

God listens, and the next morning, a massive blizzard results in school being cancelled.

Bart celebrates and begins to dress up to go outside and play and join in all the revelry of this snow day. Lisa sees him and reveals that she heard him praying the previous evening for "one more day," and that he (Bart) had now better hold up his end of the bargain. Bart agrees with her and decides to change his plans. So while everyone else is enjoying the snow day, Bart tries his hardest to focus on the expected material for the test, and not always succeeding. The next day, Bart takes the test. Anxious about the outcome, he has Mrs. Krabappel grade it right away. She does and lo and behold, he gets a 59, 1 point below the passing threshhold.

Bart immediately breaks down in tears, telling Mrs. Krabappel that he honestly tried to study and he still failed. In the process, he blurts out that his failure is similar to George Washington's surrender of Fort Necessity to the French (in 1754). Mrs. Krabappel is stunned and pleased that Bart was able to successfully recall a relatively obscure historic event and its impact on Washington's future. She is so pleased by this development that she gives him an extra point on his test, meaning that he (barely) passed. Bart is extremely grateful, so much so that he kisses Mrs. Krabappel on the cheek and happily runs through Springfield to proudly state that he passed (he only stops to spit in disgust when he realized that he kissed Mrs. Krabappel). Homer congratulates Bart for showing improvement and tapes the test to the refrigerator; Bart proudly states that part of the D-minus "belongs to God."