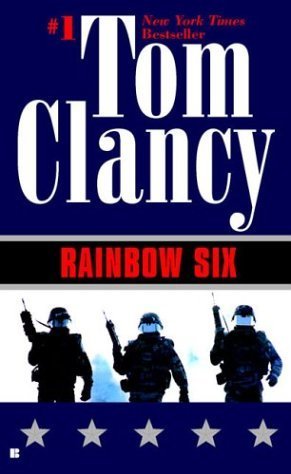 The ninth Jack Ryan novel written by Tom Clancy, and the tenth one chronologically, it was published in 1998 and takes place in 2000.

Legendary CIA operative John Clark creates an international counter-terrorism taskforce named RAINBOW. Composed of American, British, French and German soldiers, RAINBOW is the cream of the crop. Little do they know that their first few terrorist attacks are masterminded by a sinister corporation with designs that threaten the lives of everyone on Earth. Only John Clark (AKA Rainbow Six), his son-in-law Domingo "Ding" Chavez and the RAINBOW teams can prevent the end of the world as we know it.

Originally not related to the series of games by the same name, it was decided during development to base them on Tom Clancy's upcoming book. Both versions (including the first game's remake, Shadow Vanguard) feature a similar plot, though obviously the book offers more detail, including the point of view of the villains.

In 2017, it was announced that a Rainbow Six film will be spearheaded by Paramount, with Josh Appelbaum & Andre Nemec as the writers. In 2018, it was reported that the novel wil be made into a film after Without Remorse.