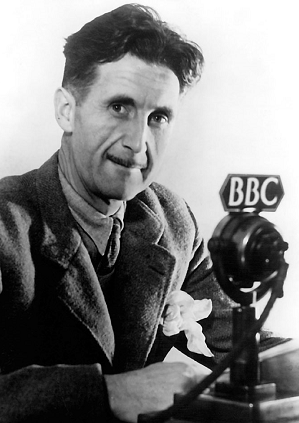 George Orwell reporting for the Ministry of Tru ... er, The BBC.
"If Saint Thomas More was the first Englishman, as one historian called him, then Orwell was perhaps the last."
— Paul Potts
Advertisement:

Eric Arthur Blair (June 25, 1903 – January 21, 1950), better known by his pen name George Orwell, was one of the most influential authors in the English language.

A democratic socialist most of his adult life, his views changed somewhat over time, as he became more cynical, but he never renounced his support of democratic socialism. His dislike of fascism and Stalinism (which he considered a totalitarian corruption of socialism) was very clear. Orwell, a journalist, participated in the Spanish Civil War on the side of the Republicans, serving in the party militia of the P.O.U.M. or Party of Marxist Worker's Unification,note Note that he didn't care for the POUM's ideology very much — he only ended up in its militia because he had come to Spain via the British Independent Labour Party, which was affiliated with the POUM. And because the POUM was against the Soviets, whom Orwell already mistrusted. and even got shot in the throat (an experience that he would later describe as "interesting"). His works tend to be considered cynical. The term "Orwellian" is named after his famous works of dystopian fiction, particularly 1984.note Which is more than a tad ironic, given that this went against what Orwell himself believed.

Just some of the 556 articles that he wrote:

Several additional tropes were inspired by Newspeak, including:

George Orwell is the source of several trope names:

He is also the current mascot for the "Have a Nice Cup of Tea and Sit Down" page. He considered tea to be Serious Business. Brits Love Tea, indeed.